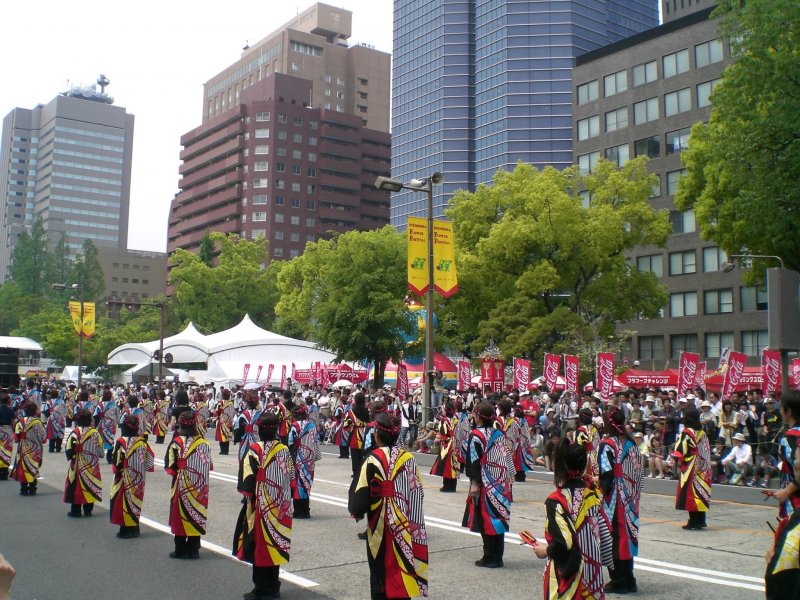 Please note that the 2023 event will be moved to June (for two days as opposed to the regular three), as the G7 summit will be held in Hiroshima during May.

Every year, Hiroshima’s 100m-wide Peace Boulevard is closed to traffic and given over to parades, dancing, stages, and stalls. The Flower Festival, with its carnivalesque atmosphere, draws over a million people every year.

Although it has endured for nearly 40 years, the Flower Festival lacks the history of Hiroshima’s other major city center festivals, Toukasan and Ebisuko. It can, in comparison, seem rather corporate, but, if you find yourself in Hiroshima during Golden Week, there is still plenty of fun to be had.

The festival kicks off around midday with the Flower Parade. Decorated floats, marching bands, dance troupes, and various citizens’ groups make their way along Peace Boulevard from the east to Peace Memorial Park, where the main “Carnation” Stage is located. This is where the big-name guests sing, dance, and tell jokes, and on which a Kagura dance performance is held as the sun goes down on the second day.

The main event of the final day is the Yosakoi dance parade. Yosakoi is an energetic dance that originated in Kochi, and is now incredibly popular all over Japan. It combines traditional Japanese dance with modern music, and, over several hours, scores of groups in colorful costumes and make-up, snake along Peace Boulevard doing their own version of the dance in the hope that they will be selected as one of the top teams.

There are nearly 20 other stages of various sizes set up along both sides of Peace Boulevard, all named after different flowers and sponsored by different companies. You’ll see school kids performing, pensioners hula dancing, minor celebrities, and local bands banging out Japanese rock tunes. Between the stages and along the outer edge of Peace Boulevard’s green belt there are hundreds of stalls hawking food and festival games.

Particularly popular, are the international food stalls which tend to be concentrated together. Vegetarians are mostly out of luck, but the hungry meat-eater can burn through a lot of cash stall-hopping and there is a great atmosphere. Those in search of a festive tipple should head to local sake and craft beer tents. Small children will enjoy letting off some steam in the bouncy castle and the local power company usually has a tent where kids can play games for free and win snacks as prizes.

A, more contemplative, recent addition to the festival is the “Flower Candle Message” illumination of the Peace Memorial Park. Hundreds of candles decorated with personal peace messages. It is an opportunity for those who cannot be in Hiroshima on August 6 to make a gesture of commemoration, and it is a beautiful sight (the candles are lit from sunset until about 9 pm, 8:30 pm on the final day).

How to Enjoy Flower Festival

Peace Boulevard is a wide road, but with several hundred thousand visitors a day, it can get very crowded. This is especially so during the parades on the first and final days when everyone is crammed onto the sidewalks. If you’d rather avoid the crowds stick to the middle day when there are usually no parades, or after around 3 pm when the parades are finished.

The weather is often very warm during the Flower Festival, so bring a hat and sunscreen. On particularly hot days, arriving later in the afternoon when the sun is less intense is worth considering.

A schedule of events written in Japanese, which includes everything happening on every stage, is published a few days before the event, but it is difficult to decipher. I advise letting serendipity be your guide. Dive in, wander and see what you come across.

If fighting the crowds is too much, grab some food and drinks, find yourself a shady spot on a patch of grass, and watch the mass of humanity pass you by. It can be very entertaining.

Parents with babies and toddlers might appreciate that some of the larger hotels along Peace Boulevard open up their lobbies for anyone to use their toilets and changing facilities.

As the event draws near you can usually find additional details about performers and events at the festival on the local listings site GetHiroshima. Festival fun winds down at about 7 pm, but night owls might be interested in some of the underground club and music events that local organizers pack into the short holiday.

A total of 18 years in Japan and still loving it. Co-founder of GetHiroshima.com and publisher of the GetHiroshima Guide Map. Lapsed Ironman triathlete. Now trying to fit a passion for ultra distance trail running between raising two kids and occasional sessions in the DJ booths of Hiroshima.