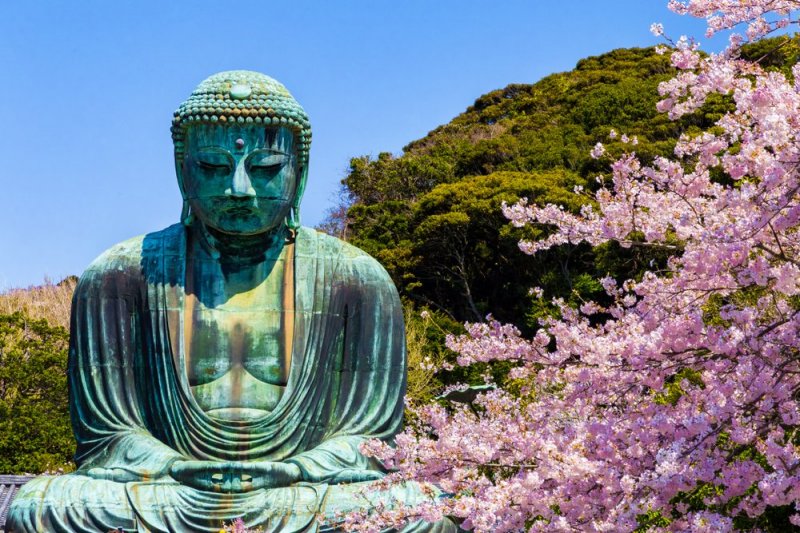 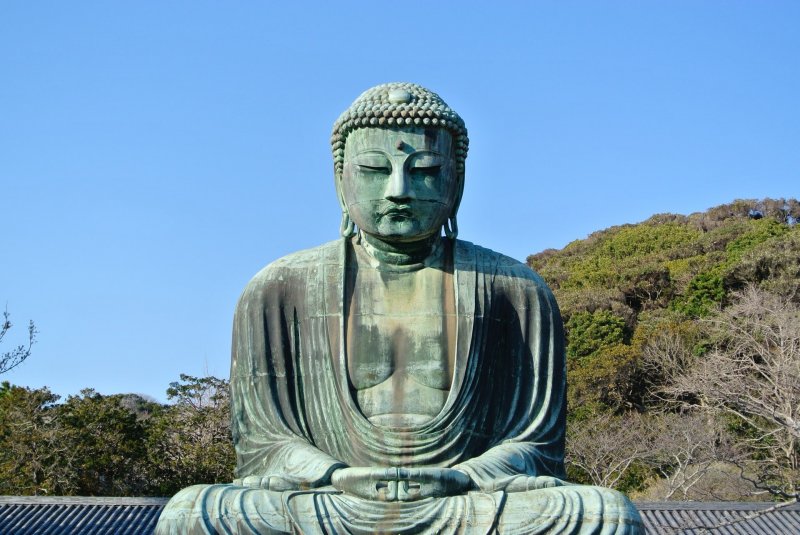 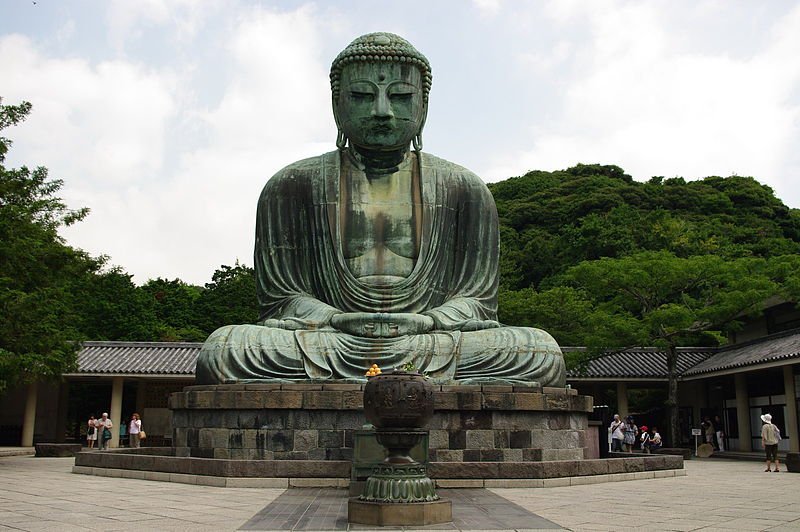 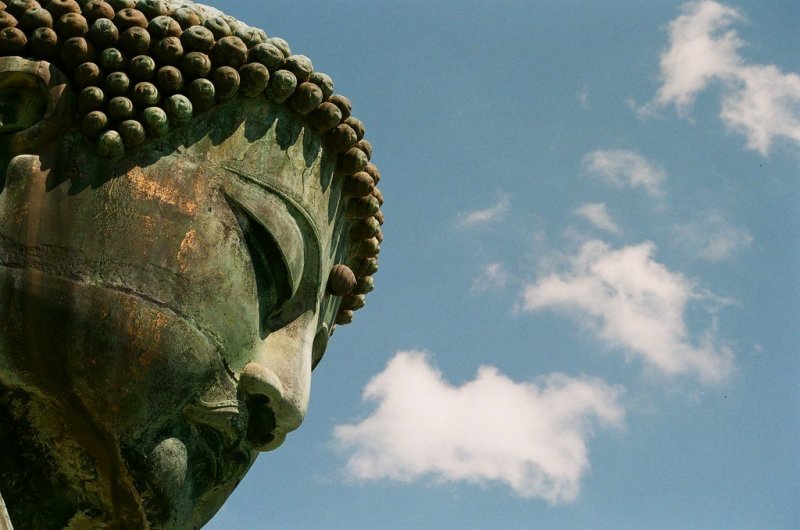 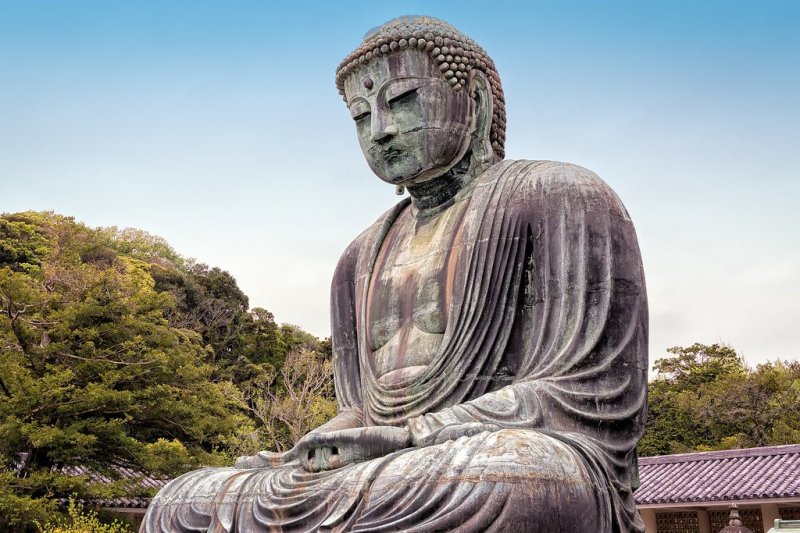 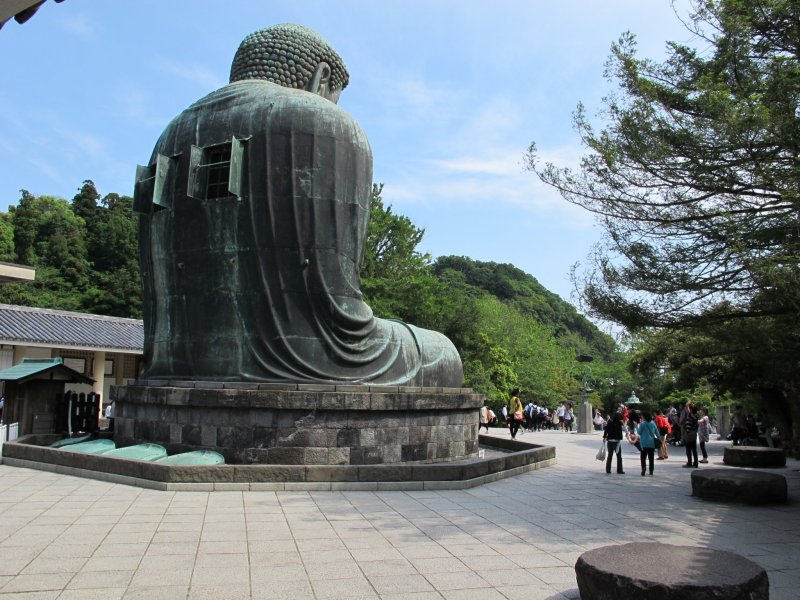 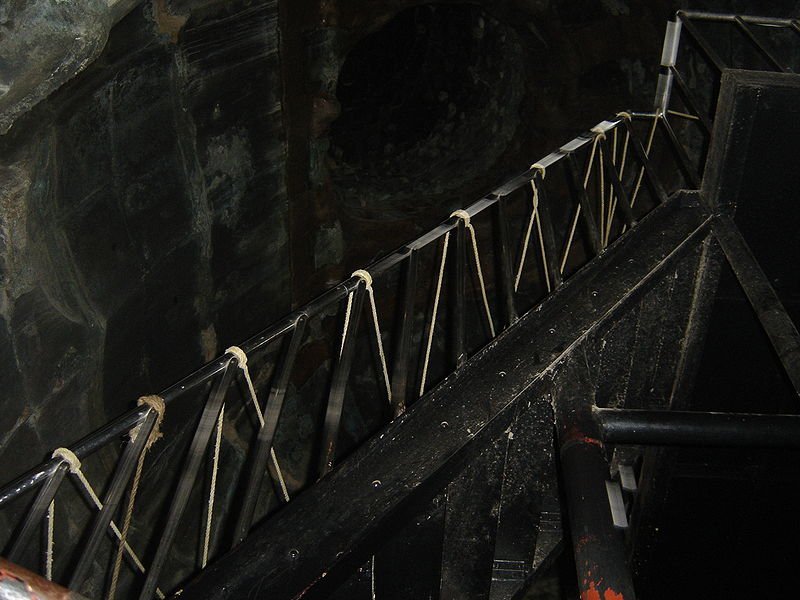 Kamakura's Daibutsu is a beautiful bronze statue of Amitabha Buddha that was erected in the Kotoku-in Temple in the middle of the 13th century (750 years ago). With a height of 11.3 meters, it is the second tallest bronze Buddha statue in Japan that only is surpassed by the statue in Nara Todaiji Temple.

The Buddha has been meditating in the open air for about 500 years after the temple hall in which it was originally housed was destroyed several times by tsunamis and typhoons.

When you visit, you might see him drenched in the rain, sweating under the blazing sun, or just enjoying the warm spring sunshine. Kamakura's daibutsu has been kept intact without major restorations since it was built.

You can reach Daibustu in three ways, by the Enoden (tram), by bus, and by foot. If you choose the Eno-den, please get off at Hase Station. After passing through the ticket gate, turn right and walk for 7 minutes. If you take a bus, the bus will leave from an East gate terminal (#1 or #6). Pay when you get off at the front of the bus. The fare will be 190 yen. Get off at the “Daibutsu-mae” stop, the one after Hase Kannon. This bus stop is a bit tricky. After you get off the bus, walk back in the direction your bus just came from, and cross the street at the signal. The entrance to Daibutsu is on the left. If you get there in the afternoon, you’ll be fine—just follow the crowds. But if you are an early bird, and no one is there in the morning, it might be confusing. Finally, if you follow a map, walking to Daibutsu is quite easy. You can enjoy a nice stroll. The back streets of Kamakura are beautiful!

Kamakura’s Hasedera Temple, a sister temple to Nara’s temple of the same name, is renowned for its 11-headed statue of Kannon, the goddess of mercy. This Jodo-sect Buddhist temple is one of the oldest temples in the city and has roots in the eighth century. Legend has it that the monk Tokudo Shonin requested two Kannon statues to be made from a camphor tree in 721. The smaller statue was enshrined at Nara’s temple, while the other one was thrown into the sea as an offering. In 736, the statue washed ashore in Kamakura, and Hasedera was built to enshrine it. Hasedera’s grounds feature a harmonious display of traditionally designed temple buildings interwoven with lush nature and seasonal flowers, making for a peaceful stroll. Thanks to its elevated position, it also offers wonderful views of Kamakura’s townscape and Sagami Bay. The temple’s artfully crafted nature is on full display when you first enter the grounds. The welcoming garden features a pond encircled by plants, the small Benten-do Hall, dedicated to the goddess of music and wisdom, and Benten-kutsu Cave, which contains carved statues of deistic Buddhist figures. If you are hungry, refuel at the temple’s Teraya Cafe, located just before the entrance, or Kaikoan, which is built at an elevated level and boasts large windows with fantastic views of the area. Admission to the temple costs 400 yen for adults and 200 yen for children (ages 6 to 11). Parking costs 350 yen for 30 minutes.

Sasuke Inari Shrine is a Shinto shrine in Kamakura and the site of the Hidden Village of Kamakura. It is located very near the Zeniarai Benzaiten Ugafuku Shrine. [Wikipedia]