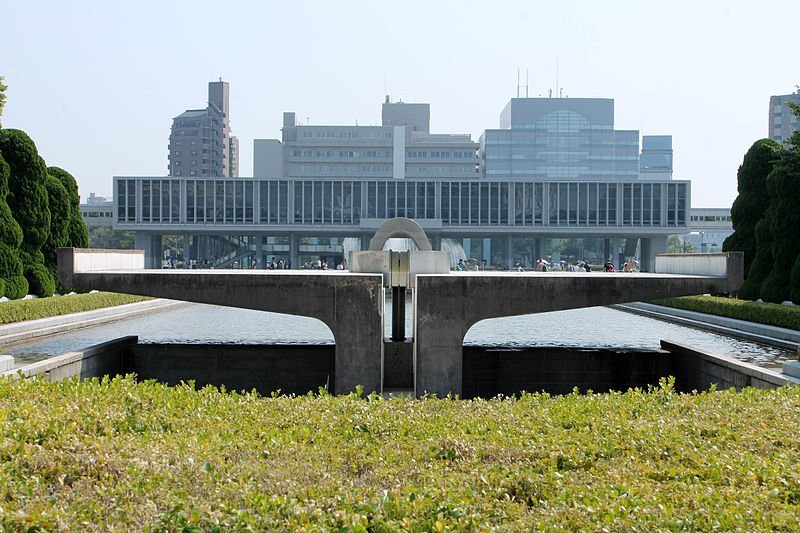 Hiroshima Peace Memorial Museum, located in southern Hiroshima, sits across from the Atomic Bomb Dome in the Peace Memorial Park. The museum houses information about Hiroshima’s history before and after the atomic bombing during WWII and aims to educate visitors about the infamous event and after-effects. Through education, the museum seeks to spread awareness about the inhumane nature of nuclear weapons and ultimately ban them. Its message is powerful: No More Hiroshimas.

To commemorate the 75th anniversary of the bombing of Hiroshima, a virtual tour of the museum has been released, as well as a Peace Park tour from the day of the anniversary event.

The east building contains three floors with permanent and temporary exhibitions. The second floor outlines the history of Hiroshima, while the third floor focuses on the aftermath of the bombing with video testimonies from bomb survivors, as well as displays about the dangers of nuclear weapons. The exhibits reflect the brutal truth of the bombing and the thousands of people who were killed and affected mentally and physically by the painful aftermath.

The permanent exhibits in the main building document the unimaginable horrors through items found after the bombing—a tricycle, a lunchbox, a school uniform—all once mundane objects whose meanings now tell of the instantaneous devastation of human actions. Photos line the walls, honestly displaying the aftermath.

Despite the unfiltered displays of war, the museum never wavers from its core message of remembrance, education, and future peace.

Okonomimura is a Hiroshima-style okonomiyaki theme park located in Shintenchi, Naka-ku, Hiroshima, near the east end of the Hondori shopping street. It has 24 okonomiyaki restaurants, each with a slightly different style and one different selection of ingredients. Okonomiyaki began in the pre-war period as a dish called "Issen Yoshoku" ("" Western food for a dime ""), which was very popular with common people. It consisted of a flour paste cooked with onions, dried shrimp, and spices. After the war, other ingredients such as cabbage, eggs, seafood, buckwheat and wheat noodles were used to improve the diet in these tough times. This is how today's Hiroshima-style okonomiyaki came about. [Photo: Victor Lee / CC BY-NC-ND 2.0]

"Carried to Hiroshima from Tinian Island by the Enola Gay, a U.S. Army B-29 bomber, the first atomic bomb used in the history of humankind, exploded approximately 580 meters above this spot. The city below was hit by heat rays of approximately 3,000 to 4,000°C, along with a blast wind and radiation. Most people in the area lost their lives instantly. The time was 8:15 a.m., August 6, 1945." This plaque on a downtown Hiroshima sidestreet marks the hypocenter of the Hiroshima atomic bombing, with the detonation of 'Little Boy' taking place 600 ft above this spot. Expect to see flowers or paper cranes left in memory at various times of the year.

With its beautiful skylines and active waterways, Oizuru Tower offers its visitors a way to see all of that activity—day or night—unobstructed by glass or rails. The wooden floors and ceilings give off a gentle warmth and the pillars that support the ceilings also provide beams of light. Instead of glass or railings, guests can feel the Hiroshima air wash over them thanks to the stainless-steel net fence. With unobstructed views of Hiroshima, including the Peace Memorial Park and the Atomic Bomb Dome (and even Mount Misen of Miyajima on clear days), the tower offers viewers a way to feel at one with the city. Hiroshima Oizuru Tower is also home to an assortment of shops and cafés. Visit the first floor to find that special souvenir of one of Hiroshima’s local products at Hito to Ki. You’ll also find Hiroshima-style okonomiyaki in Akushu Café—including unique wrap-style okonomiyaki. On the 12th floor, you can also fold your own origami crane and leave it on the Oizuru Wall with your well wishes for the future. From the 12th floor to the 1st floor, there is a slide “cool-cool-cool” that runs alongside the spiral staircase. Why not try sliding your way down twelve floors—or just a couple, as you can exit in between floors. While you take a walk inside, browse the original comic created by Shuho Sato—manga artist of “Umizaru” and “Say Hello to Black Jack”—the works inside Oizuru Tower reflect on the theme of peace. No matter what you decide to do, you’ll be delighted by the spaces and experiences that you can create. Discover the past, present, and future of Hiroshima while you gaze out at this bustling city.